THE HISTORY OF COLOMBIAN COFFEE

How Coffee arrived in Colombia

Coffee is the second most consumed beverage in the world, after water. It all began centuries ago in Africa, Ethiopia, to be exact, where coffee was initially consumed in infusions or by chewing the leaves of the coffee plant, but it was the Arabians, who were responsible for its expansion, first throughout the Arab world arriving in Turkey in 1544. In the 17th century, coffee was introduced to Europe through the port of Venice, Italy and expanded across the continent to finally reach South America by the 18th century. Those responsible for this expansion across new continents were the Dutch who didn’t want to have to depend on the Arabians. This is how, at the beginning of the 18th century, the Netherlands came to be the production leaders of the world.

One of the theories about how coffee arrived in South America is that it was the Dutchmen who introduced it through what is known today as Suriname and then the French at the beginning of the 18th century, exported it to Colombia and Brazil. By the 19th century, it had become of great importance in farming which was also influenced by the fact that by the middle of 19th century, a disease known as coffee rust attacked the crops of Ceylon, Sri Lanka today, who at that time were the main coffee producers.

IMPORTNAT DATES IN THE HISTORY OF COFFEE 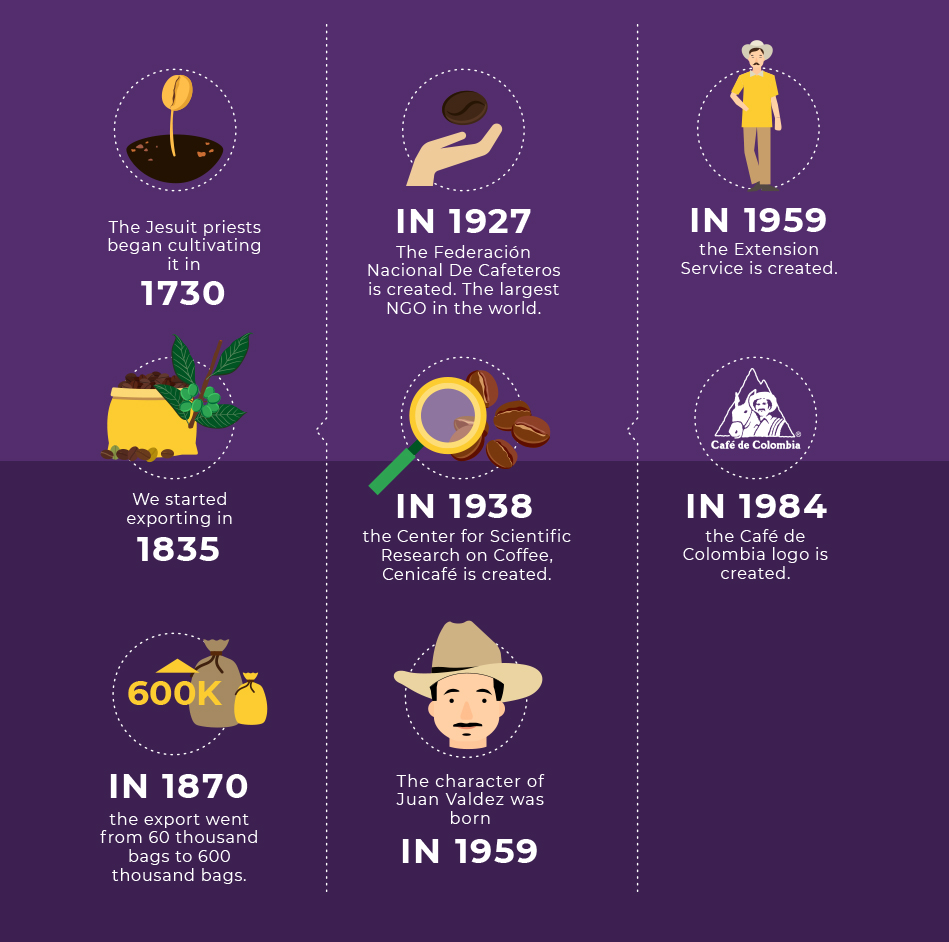 Coffee in Colombia has about 300 years of history since the Jesuits brought it to the country in the 18th century. In 1835, the first bags produced in the eastern zone were exported from Cucuta’s customs office.

When his parishioners confessed, the priest imposed on them sowing coffee as a penance in order to redeem their sins. Thanks to this, it is said that the coffee production began to expand to other Departments (Provinces), and by 1850, coffee had reached Cundinamarca, Antioquia and Caldas.

The transition from the 19th to the 20th century brought a great fall in the international market prices and therefore a crisis for the landowners, changing the whole picture. This crisis favored the small producers that were growing, and the west zone became the leader in coffee development.

In 1927 the Federación Nacional de Cafeteros was created, which was responsible for aiding and representing the coffee growers to ensure their rights.

In 1938 the Research Centre, CENICAFE was born, it was responsible for achievements like the “Castillo” variety, resistant to diseases such as rust.

In 1959 two important events occurred: The Character of Juan Valdez was born and the office of Café de Colombia was opened in Tokyo, making Japan today the second consumer of Colombian coffee in the world.

In 1984 the Café de Colombia distinctive hallmark was created, which identifies it in every corner of the world.

The 300 years of history are full of constant learnings, work and passion in order to be the best mild coffee in the world today.